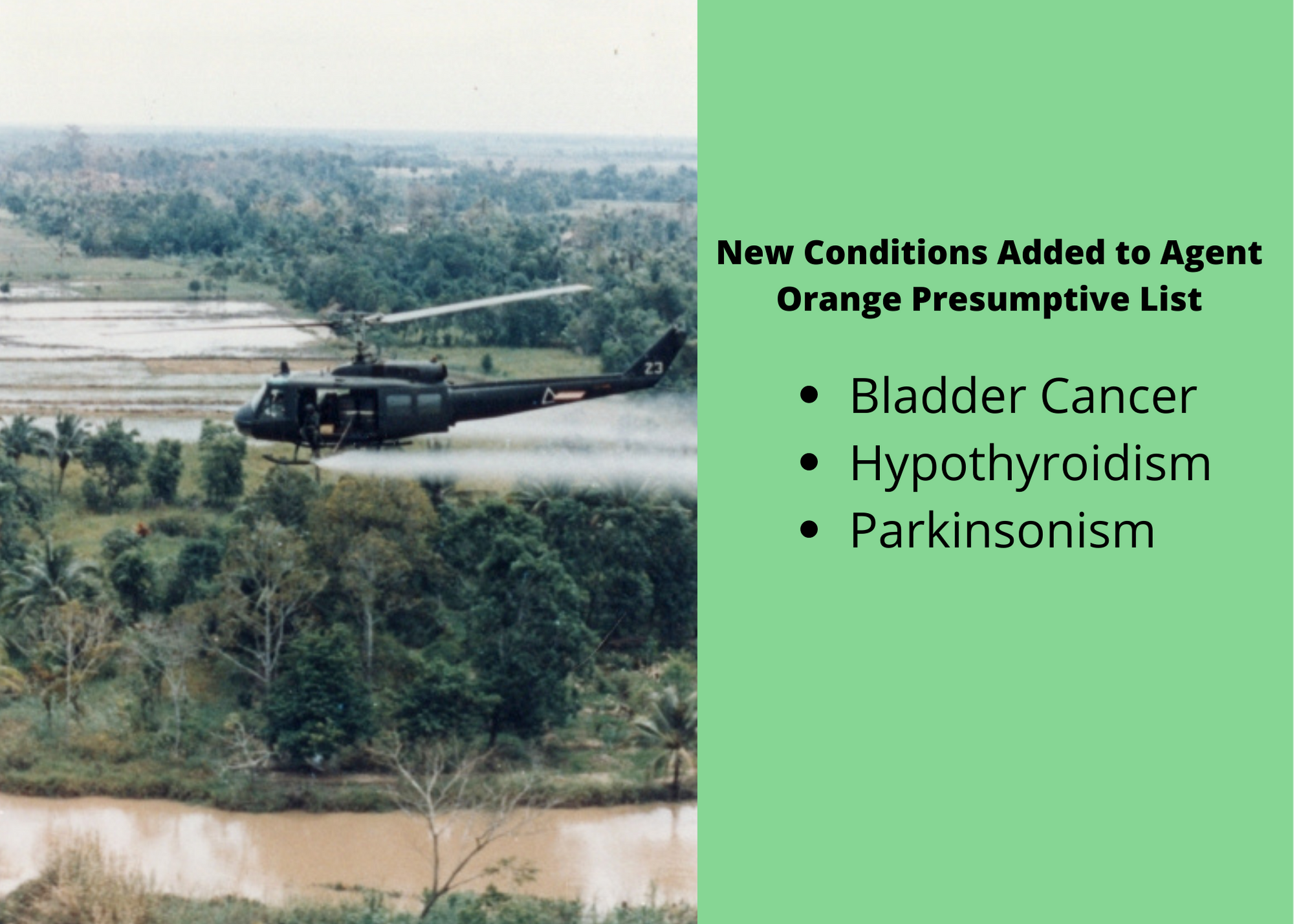 VA will begin applying provisions of the William M. Thornberry National Defense Authorization Act for the Fiscal Year 2021 (Public Law 116-283), adding three conditions to the list of those presumptively associated with exposure to herbicide agents, more commonly known as Agent Orange. Those conditions are bladder cancer, hypothyroidism, and Parkinsonism.

“Many of our Nation’s Veterans have waited a long time for these benefits,” said Secretary of Veterans Affairs Denis McDonough. “VA will not make them wait any longer. This is absolutely the right thing to do for Veterans and their families.”

VA will apply the requirements of court orders related to Nehmer v. U.S. Department of Veterans Affairs, which may result in an earlier date for entitlement to benefits for Veterans who served in the Republic of Vietnam during the Vietnam War. Vietnam War-era Veterans and their survivors who previously filed and were denied benefits for one of these three new presumptive conditions will have their cases automatically reviewed without the need to refile a claim. VA will send letters to impacted Veterans and survivors.

The Secretary recently determined the first iteration of a newly formed internal VA process to review scientific evidence to support rulemaking, resulting in the endorsement to consider the creation of new presumptions of service connection for respiratory conditions based on VA’s evaluation of a National Academies of Science, Engineering, and Medicine report and other evidence. VA’s review supports the commencement of rulemaking to address the role that particulate matter pollution plays in producing chronic respiratory conditions, which may include asthma, rhinitis, and sinusitis for Veterans who served in the Southwest Asia theater of operations during the Persian Gulf War and/or after September 19, 2001, or in Afghanistan and Uzbekistan during the Persian Gulf War.

“VA is establishing a holistic approach to determining toxic exposure presumption going forward. We are moving out smartly in initiating action to consider these and other potential new presumptions, grounded in science and keeping with my authority as Secretary of VA,” said Secretary McDonough.

VA is introducing rulemaking to consider adding respiratory conditions, including asthma, sinusitis, and rhinitis, to the list of chronic disabilities based on an association with military service in Southwest Asia, Afghanistan, and Uzbekistan during the covered periods of conflict. VA will conduct broad outreach efforts to reach impacted Veterans and it encourages them to participate in the rulemaking process.
New Conditions Added to Agent Orange Presumptive List | 2021

If you need help with your VA Claim, fill out the form below and we will connect you with one of our partners.

Click the CHAT NOW button to be directed to our partner law firm for further assistance.