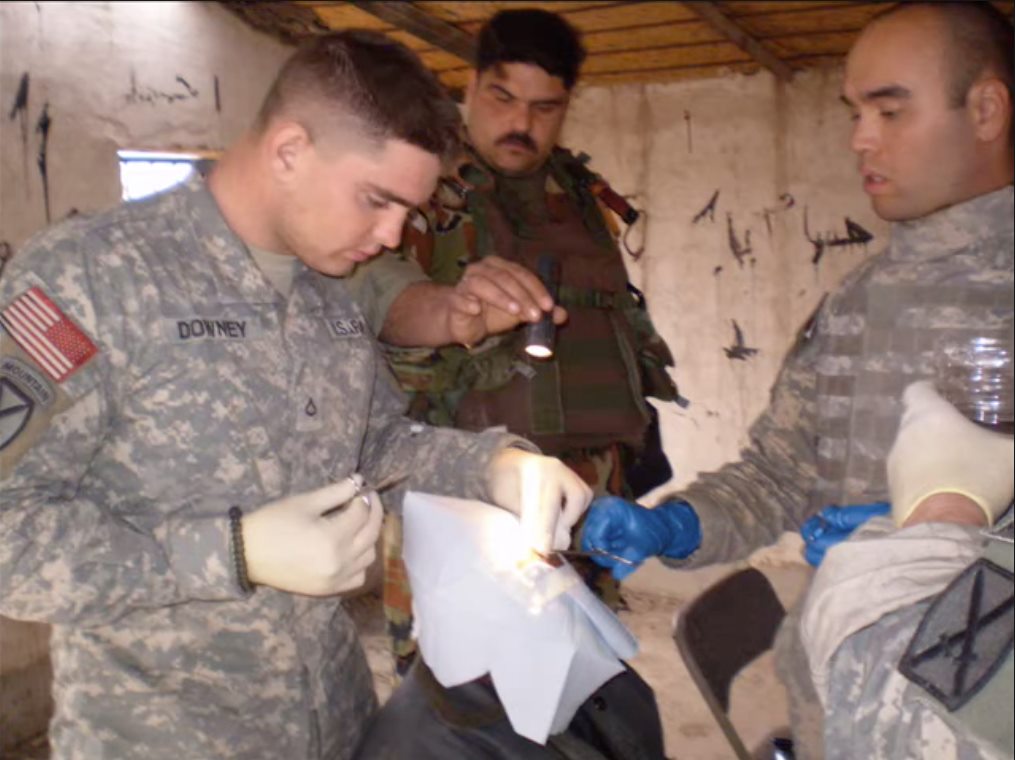 Over 58,000 Americans gave their lives in service during the Vietnam War and over 150,000 were wounded. When troops returned home, it wasn’t too fanfare. Instead, they were labeled baby killers and spit on. It’s a stain on history one modern veteran refuses to let go. We Are The Mighty sat down with Operation Triumphus to explore their mission.

Steve Downey was a combat medic in the Army who deployed to Iraq at the height of the conflict. When he looks back at how Vietnam veterans were treated and his own time in service, it leaves him both disgusted at the world and proud of how the troops handled it. “They were spat at and ridiculed. But what do soldiers do? They don’t lay down, they say here’s my new fight, let’s go,” he said.

When Vietnam War troops returned home, there were almost none of the promised GI benefits of today. The government had left them behind. Following the war and through the decades of tireless efforts of surviving Vietnam War veterans, Congress was forced to make changes to honor those veterans and the ones who would come after.

It wouldn’t be until the first Gulf War when American attitudes would shift. The terrorist attacks of 9/11 would increase patriotism and appreciation for troops tenfold.

“We veterans who came after Vietnam Veterans owe them a debt of gratitude for our increased quality of life, care and veteran benefits,” Downey explained. “Every iconic image of war or the military is either modern day troops or World War II veterans. Vietnam and Korean War veterans are being skipped and it seems like we don’t care. It’s insulting when you really get into it.”

Downey came back from his Iraq deployment and began working at Walter Reed in the organ transplant department. After separating from the Army, he’d also leave medicine and discover a passion for technology which led him to open his own business. In 2020, he’d join the marketing part of the team at Berry Law, headquartered in Nebraska.

Founded in 1965 by Vietnam War Veteran and Bronze Star recipient John Stevens Berry Sr., The military law division serves veterans in all 50 states and is tirelessly dedicated to the military community. In 2020, the team began to talk about ways to honor Vietnam Veterans. Operation Triumphus, an initiative under Berry Law Firm, was established, with Downey at the helm of the project.

“The idea here is to allow Vietnam Veterans the opportunity to preserve their stories, their legacy and then we can provide their triumphant return home they deserve. It’s a deserved celebration led by every veteran that came after them,” Downey explained.

The website for the initiative states “Our objectives are to provide an interactive museum which helps share the stories of Vietnam Veterans; to help connect our lost brothers and sisters in arms and to inspire ongoing gratitude for a generation of Veterans who were spat upon and ridiculed when they came home. We cannot replace the feelings of betrayal and loss that some Veterans felt on their return, but we can correct the course of sentiment to make sure that future generations understand and honor their legacy. The Vietnam generation said ‘Never Again!’ and fought hard to get better treatment for Veterans. Their actions helped future service members and Veterans get better treatment, and we feel it is our duty to repay them for their sacrifices and vigilance.”

After building the site from scratch, he’s got his eyes on engaging the military community next. “One of the biggest target audiences for me right now is not just the Vietnam veterans but their spouses and families,” Downey said.

With the experiences most Vietnam War veterans faced, many are hard-pressed to share their stories openly. He’s hoping by engaging with spouses and other family members about this project, it’ll be a healing experience for the veterans. It’s long overdue for these heroes and their families.

This statement featured on the organization’s website truly drives home the mission of Downey’s passion project for the firm: “We are Veterans of wars in Vietnam and the Middle East. We are sons paying tribute to fathers. We are a grateful nation determined to provide an eternal Triumphal Procession these Vietnam Veterans deserve.”

To learn more about Operation Triumphus or to share your Vietnam War story or your loved ones, click here.

The original article was by Jessica Manfre and can be read here:

Iraq Army veteran continues the fight, this time for his Vietnam veteran brothers and sisters

Click the CHAT NOW button to be directed to our partner law firm for further assistance.