About Person of Interest 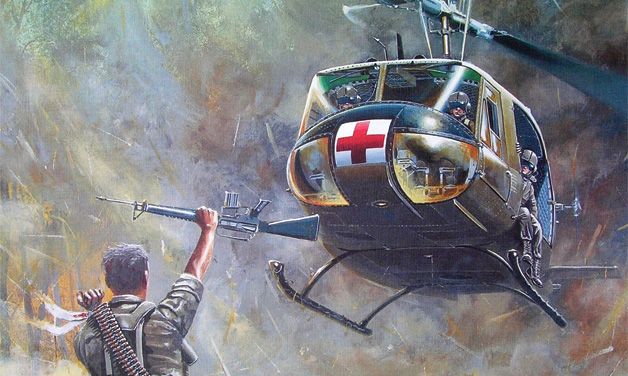 Rare Vietnam Photos You Never Knew Existed
The Vietnam War was one of the most controversial and bloody wars in U.S history. It carried on for twenty years (1955-1975) and t...
(Read More)
By John Podlaski

Black Friday
This is one of many stories written about the naval aviators that flew in support of the war in Vietnam. Many of those aviators r...
(Read More)
By Bob Keller

Aircraft down!! Who’s down there??

Summary
At approximately 0330 hours on the dark and rainy night of June 12, 1965, a Vietnamese Air Force flare ship, in support of an outpost under the Viet Cong attack, disappeared from the area radar control scope. Paddy control called an emergency search rescue scramble to the area located twenty miles southeast of Cantho.
Story

At 3:30 AM, on a dark and rainy morning, the author and his Dustoff crew is dispatched to an area 20 miles away in response to the crash of a South Vietnamese Air Force C-47 flare ship that was flying in support of an outpost under attack by VC. This is how he remembers the mission:

This was a mission near the end of my first tour 64-65 down in the delta.  While reviewing this action, I thought I would try to let the reader go into the mind of a Dustoff crew while they’re searching for their patients and how they decide what they will do when they find them.  The story was published a while ago in the Dustoff Newsletter. The Charge of Quarters for the 82nd Med. Det (Hel Amb) at Soc Trang, RVN woke up the duty crews with ”Scramble, Aircraft Down.”  We jumped into our flight suits and ran to Operations for directions. We were told to get airborne – Paddy Control Radar Station would vector us to the site.

At approximately 0330 hours on the dark and rainy night of June 12, 1965, a Vietnamese Air Force flare ship, in support of an outpost under the Viet Cong attack, disappeared from the area radar control scope. Paddy control called an emergency search rescue scramble to the area located twenty miles southeast of Cantho.

As we approached the general area, we could see flares lighting the outpost. Our immediate impression was that the aircraft was not down but was still on station dropping the flares.  Called Paddy Control and reported the fact that we had flares insight. They verified that they were mortar flares from the outpost.

As we neared the site, we could see the red lights of the Armed Helicopter flight (code name Maverick) approaching from directly in front of us. Called Maverick Leader and gave him our position. He replied that he had us insight and would be over the area in two minutes. The U.S. Air Force Flareship (code name Smokey Blue) called in and said he would be there in three minutes. All three search rescue units were now converging on the crash site.

Maverick:  We’re going down in a right-hand orbit to search the area.

THOUGHTS:  Have the VC reached the crash site yet?  Is anybody down there?

DUSTOFF: We’re descending to 500 feet to search with you.

THOUGHTS:  What’s going on down there? What will we find?

MAVERICK: ”We’ve spotted the crash– RIGHT BELOW US.”.

DUSTOFF:  Roger, we see it now–totally burned out—do you have anyone in sight?

THOUGHTS:  How could anyone have possibly gotten out of that mess?

MAVERICK:  Negative–no one in sight–doesn’t look too good- we’ll widen the orbit and keep looking.”

MAVERICK:  Roger, we see them–going over to check them out.

THOUGHTS:  WHO’S DOWN THERE? Can it be the crew? How did they get out of that burned-out hulk? Where’s the VC? The grave possibility existed that the bad guys had reached the crash site and were now luring the rescuers into a vicious trap.

MAVERICK:  We made a low pass–no fire received–It’s a group of men but, we can’t identify them. We’re going around for another look.

THOUGHTS:  Is it the crew or the VC? What a trap this could be! The VC had plenty of time to get here.

MAVERICK:  Still can’t make any positive identification.  It’s your call, Dustoff!  What do you want to do?

CAPT. CEDOLA TO HIS CREW:   OK guys, could be them or it could be the bad guys.  We’ve got to find out for sure though and there’s only one way to find out.  If it is the crew and we don’t get them, they’re dead by morning.  We’re going to try it!

DUSTOFF:  Roger that– Maverick, we’re going in. Cover us.

MAVERICK: Roger, Dustoff–recommend an approach of 350 degrees. You’ll have a tree-line on both sides, but, it’s the best way in and back out.

DUSTOFF:  We’re coming down now–pick us up and escort us partway in.

THOUGHTS:  Here goes the show! Lord, I hope it’s them.

DUSTOFF:  Hey Smokey, please stop the flares, we need all the dark we can get.

MAVERICK:  Roger, we’ve got you in sight.

NOTE: At this time the armed helicopters formed a racetrack pattern over the descending Dustoff to return any fire that may be received.

CAPT. CEDOLA (To Crew) Open the doors and be ready. Keep your eyes on the tree lines for enemy fire. (To co-pilot) Brent, get on the controls with me, turn the red beacon and navigation lights off, I want to go in totally blacked out.  When I flare up, turn on the searchlight and be ready to turn it off immediately.

THOUGHTS:  If it’s not them we’ve had it, coming straight down the barrel.

NOTE: With the outside lights, off and the interior panel lights dimmed, we begin a diving descent to an area about 500 meters south of the target and then a high speed, low level, zig-zag run straight to the torches.

THOUGHTS:  We’ve got to identify them before we get too close!  We’ll have to turn on the searchlight!  What a target we’ll make if it’s the VC.

DUSTOFF:  Maverick, I’m going to turn on my searchlight and see what happens. If we draw fire I’m climbing right and fast!

LT MAYKUTH:  It’s them, look at them laughing and jumping around! In their underwear!!  There are six of them, looking pretty happy!!

THOUGHTS:  Did you ever see such happy people? Thank God they’re alive.

SP5 MORRIS: (Dustoff Medic) ”All in Sir, let’s go, these guys are beating us up with happy!!”

DUSTOFF:  Maverick, we’re coming out now opposite-direction– all safe—we’re taking them to Cantho.

DUSTOFF:  Paddy Control, we’ve got the survivors aboard now coming to Cantho Airfield. They’re in pretty good shape, a couple of them have minor burns but they’re OK.  Call VNAF and get them a ride home.

THOUGHTS:  This was a hairy mission mainly because of the unknown- the rainy weather and darkness were added factors. It was sure nice having Maverick and Smokey Blue providing cover on this mission. And all ended well. The VNAF crew miraculously survived an in-flight fire, a crash landing and was rescued before the enemy got to them.  And we were able to find out WHO’S DOWN THERE???

On the ground at Cantho, Vietnamese Airforce Major Ngyuen Manh Bong, the Aircraft Commander of the flareship and Operations Officer for Premier Ky, explained what had happened in a hair-raising story.

A parachute flare misfired before being released from the can and set off the rest of the flares in the rear of the aircraft. The flames shot up almost instantaneously and the crew ran forward to the cockpit. Seven men were trying to stuff themselves into the 2-man cockpit.  The pilot dove the aircraft toward the ground. The flames licked at the cockpit doorway: singeing the pilot’s hair. The cockpit filled with smoke, choking them and obscuring the pilot’s vision. The navigator opened the overhead hatches and stuck his head out to breathe and to look for the ground. The crew were all yelling and screaming.

The pilot was blinded by the smoke and could not even see the instruments. With nothing to guide him and nothing to lose, he kept the aircraft in a steep dive. He planned to level out at the right moment, but when was that? He decided NOW; and pulled back on the stick. The aircraft leveled and instantly struck the ground. They hit a rice paddy and skidded parallel to the berms. He had miraculously leveled at precisely the right moment. To this day the pilot cannot explain how or why, but it worked, they were alive. The crew evacuated the burning hulk and ran for cover.  But now, their problems were really starting.

Major Bong said he knew the VC would be coming after them soon, so they left the crash site, buried their flight suits and hid in the bushes. They had no weapons since they were stored in the rear of the burned aircraft.  Major Bong said that had we not rescued them; their heads would have been on a stake in the morning.  So, his plan was to strip to their underwear and disperse throughout the paddies pretending to be farmers and hoping for the best.

Then, he heard us overhead and saw the red lights searching. So, they made the torches out of dried reeds and signaled to us, risking the possibility that the VC would see the torches and get to them before we did.

VNAF Headquarters and the crew were so grateful for this rescue, they hosted a reception for all members of the rescue team at a Saigon restaurant.  Premier Ngyuen Cao Ky arrived and personally thanked each member of the team. Captain Cedola was presented with a citation and Vietnamese Airforce Aviator Wings, becoming the first, and perhaps the only US Army Aviator so honored.  The rescue crews were also awarded VNAF’s highest decoration, the Vietnamese Air Gallantry Medal with Gold Wings.

This is one of many stories written about the naval aviators that flew in support of the war in Vietnam. Many of those aviators r...
(Read More)
By Bob Keller
3
627

Operation SWITCHBACK ordered the handover of clandestine operations from the CIA to the Military Assistance Command, Vietnam (MACV...
(Read More)
By Steve Downey
1
477

Forwarded to me by my friend John M. DeCillo. “This story includes a friend and former co-worker of mine from my Railroad days....
(Read More)
By John Podlaski
1
844